As you hold your hands with thumbs touching and fingers spread, a thin sheet of flames shoots forth from your outstretched fingertips. Each creature in a 15-foot cone must make a Dexterity saving throw. A creature takes 3d6 fire damage on a failed save, or half as much damage on a successful one.

The fire ignites any flammable objects in the area that aren’t being worn or carried.

The classic spell that’s great for melting the faces of whoever’s unfortunate enough to be right in front of you, Burning Hands is a staple of DnD spellcasting. It’s a no-nonsense, big-damage, short-range, area of effect spell that behaves just as you’d expect a spell like Burning Hands to behave.

That said, there’s still plenty of confusion around this spell, from just what a “15-foot cone” is to the common “can I re-flavor the damage type” question. We’ll sort all that out, as well as provide a few fun applications for the spell you may have failed to consider.

Who Can Cast Burning Hands in 5e?

The following classes have Burning Hands on their spell list:

The following subclasses get Burning Hands for free:

What Does Burning Hands Do in 5e?

Burning Hands forces all creatures in a 15-foot cone emanating from the caster to make a Dexterity saving throw. The 15-foot range refers to the maximum length of the cone — on a standard “1 inch = 5 feet” battle map, this means Burning Hands extends three squares away from the caster (although the rules are a bit less straightforward than that…)

A creature takes 3d6 fire damage if it fails, or half as much if it succeeds. Flammable objects in the area that are not being worn or carried also ignite.

Now, onto those less-than-straightforward rules…

What Are the Rules for Burning Hands 5e?

The rules for Burning Hands in DnD 5e are as follows: 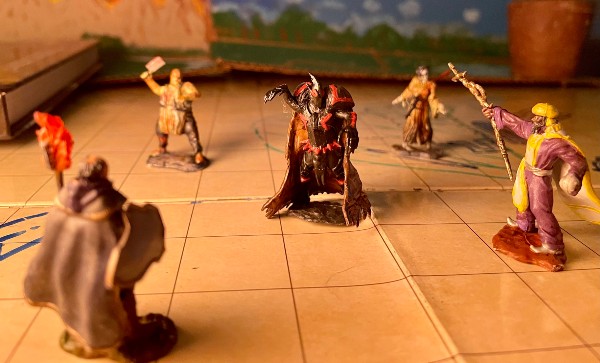 How Do I Use Burning Hands 5e?

We’re sure anyone who’s played a spellcaster in a fantasy game already has some ideas on how to use Burning Hands, but here are our two cents:

Who Can I Target With Burning Hands 5e?

Burning Hands targets a 15-foot cone, emanating from the caster. Let’s go directly to the rulebook for how cone spells work:

The third line means that Burning Hands’ maximum length is 15 feet long, at which point it is also 15 feet wide (3 squares wide, if using a 1 inch = 5 feet battle map).

The final line means that the caster can choose to include their own space in the spell’s area of effect, if they choose to. If a caster does choose to do this, they will also need to make a Dexterity saving throw and will take damage from their own spell.

Xanathar’s Guide to Everything provides a few tricks for measuring a cone, including the template method and token method (XGtE 86-87). The template method is much easier to apply and quickly use at your table, so that’s the one I recommend using.

This method would make Burning Hands much weaker than the “use a template and hit at least 1% of a square” method, however, as well as being more cumbersome to apply in-session.

If you want a great deep dive into how cone spells work in DnD 5e, this video by Treantmonk’s Temple does a better job than I can:

Yes, Burning Hands is a good spell. In fact, it has the highest average damage roll (10.5) of any 1st-level area of effect spell in DnD 5e. This big damage is paid for with big risk, though, as a spellcaster has to get within 15 feet of the creatures they hope to target.

Still, a chance to deal 30-60 damage in one round of combat as a 1st-level spellcaster undeniably makes Burning Hands a good spell. And the upcast potential for +3.5 average damage per slot level above the first really adds up when you’re hitting multiple enemies at once.

On the slightly negative side, Burning Hands deals fire damage, one of the more common resistances and immunities in the game (although this fact’s importance is often overhyped).

While 1st-level players might be stoked (heh) to get their hands on some fiery goodness, long-term planners might ask themselves whether Burning Hands will simply get outclassed as they level up.

The answer is yes, Burning Hands does get eclipsed by Fireball when the third-level spell becomes available to you.

Upcasting Burning Hands to a 3rd-level spell brings its damage up to 5d6 compared to Fireball’s 8d6. Fireball has a 150-foot range and affects a 20-foot radius sphere (much larger than a 15-foot cone). Fireball relies on the same saving throw and also ignites non-worn/carried flammable objects, so that part’s a wash.

The only time when Burning Hands is the superior option is when collateral damage is an issue. If Fireball’s huge radius is a liability to your allies, the more focused flame offered by Burning Hands might be the right choice.

Does that mean there’s no point in taking Burning Hands? No. 3rd-level spells don’t become available until at least 5th level, and you certainly won’t regret having Burning Hands for levels 1-4.

We’ve got three tips for DMs regarding Burning Hands:

Burning Hands: (1st-level evocation, Self (15-foot cone), V/S) Force Dexterity saving throws for all creatures in range. A creature take 3d6 fire damage on a failed save, of half as much on a success. The fire ignites flammable objects in the area that aren’t being worn or caried. | +1d6 per slot level above 1st