You brandish the weapon used in the spell’s casting and make a melee attack with it against one creature within 5 feet of you. On a hit, the target suffers the weapon attack’s normal effects, and you can cause green fire to leap from the target to a different creature of your choice that you can see within 5 feet of it. The second creature takes fire damage equal to your spellcasting ability modifier.

This spell’s damage increases when you reach certain levels. At 5th level, the melee attack deals an extra 1d8 fire damage to the target on a hit, and the fire damage to the second creature increases to 1d8 + your spellcasting ability modifier. Both damage rolls increase by 1d8 at 11th level (2d8 and 2d8) and 17th level (3d8 and 3d8).

Tasha’s Cauldron of Everything, pg. 107

Green-Flame Blade originally came to DnD 5e in the Sword Coast Adventurer’s Guide back in 2015 and was later updated and reprinted in Tasha’s Cauldron of Everything in 2020.

But ever since its release, players have been theorycrafting about where exactly this melee-ranged cantrip fits into a character build. There’s also a whole heap of rules questions around Green-Flame Blade, which we’ll also tackle.

Who Can Cast Green-Flame Blade in 5e?

The following classes have Green-Flame Blade on their spell list:

No subclasses get Green-Flame Blade for free.

What Does Green-Flame Blade Do in 5e?

Green-Flame Blade is a Cast a Spell action during which the caster makes a normal melee attack, using normal attack and damage modifiers (as opposed to spellcasting modifiers). That means the caster will be using Strength or Dexterity for those rolls in most cases.

If the attack hits, the target suffers all the normal weapon effects (damage, extra magical effects on the weapon, etc.) and the caster can choose to cause an additional 1d8 (4.5 average) fire damage to a different creature within 5 feet of the initial target equal to their spellcasting modifier (Intelligence for Artificers and Wizards, Charisma for Sorcerers and Warlocks).

Once a character is 5th level, Green-Flame Blade also causes an instant 1d8 fire damage to the initial target, as well as an additional 1d8 + spellcasting modifier fire damage to the secondary target. Both of these damage rolls increase by another 1d8 at 11th and 17th level.

What Are the Rules for Green-Flame Blade in 5e?

The rules for Green-Flame Blade in DnD 5e are as follows: 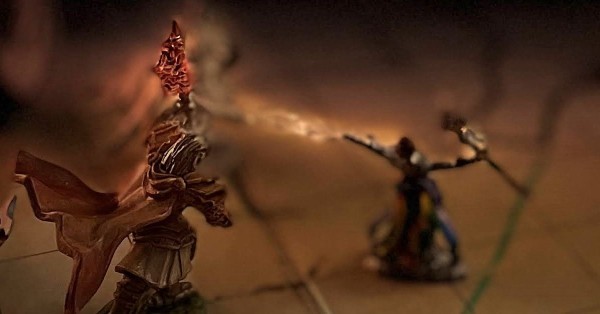 How Do I Use Green-Flame Blade in 5e?

Here’s how to make the most of Green-Flame Blade in DnD 5e:

Who Can I Target With Green-Flame Blade 5e?

You can target one creature within 5 feet (melee range) with Green-Flame Blade. While the range of the spell is listed as Self (5-foot radius), this is mainly to prevent it from working with the Spell Sniper feat and reach weapons and other, more edge-case rules.

Yes, Green-Flame Blade is a good spell if you’re able to use it to hit a secondary enemy. While the damage won’t be super high at low levels, the ability to spread damage around to enemies (who probably have low hit points anyway) is very handy.

Players often discuss whether it’s better to use Green-Flame Blade or just use an Extra Attack. Luckily, RPGBOT did some excellent analysis (so I don’t have to :))

What he found is that Green-Flame Blade is better than a single Extra Attack (so not for higher-level Fighters), as long as you get the secondary effects (you have an eligible target for its secondary damage).

I recommend reading RPGBOT’s full article for a more comprehensive rundown of the scenarios where each option wins out.

As for natural weapons and unarmed strikes, that’s more of a gray area. The spirit of the spell is that your melee weapon is being charged with fire energy which is then released upon hitting something.

Are Tabaxi charging their claws? Is a Monk charging his fists? I don’t really see any harm in allowing for it, since these weapons tend to do less damage than regular melee weapons anyway.

If a player is excited about tossing out fiery punches, why get in the way of that?

Green-Flame Blade: (Evocation cantrip, Self (5-foot radius), S, M (a melee weapon worth at least 1 sp)) Make a melee attack one creature in range with the weapon you use to cast this spell. On hit, target suffers the weapon attack’s normal effects and you can deal fire damage equal to your spellcasting ability modifier to a different creature within 5 feet of it.

| At 5th level, the melee attack deals an extra ld8 fire damage to the target on a hit, and the fire damage to the second creature increases to ld8 + your spellcasting ability modifier. +1d8 to both damage rolls at 11th and 17th level.