You hurl a 4-inch-diameter sphere of energy at a creature that you can see within range. You choose acid, cold, fire, lightning, poison, or thunder for the type of orb you create, and then make a ranged spell attack against the target. If the attack hits, the creature takes 3d8 damage of the type you chose.

Chromatic Orb is a multiple-choice elemental spell with a big price tag (DM depending) and big single-target damage for a 1st-level spell slot. Let’s dive straight into the common conversations around Chromatic Orb in 5e.

Who Can Cast Chromatic Orb in 5e?

The following classes have Chromatic Orb on their spell list:

No subclasses get Chromatic Orb for free.

What Does Chromatic Orb Do in 5e?

Chromatic Orb is a straightforward ranged spell attack. To hit, roll a d20 and add your spellcasting ability modifier and proficiency bonus. If you match or exceed the target’s AC, the spell lands and you can roll 3d8 for damage. Chromatic Orb deals an average of 13.5 damage at first level.

The really interesting thing about Chromatic Orb is that you can choose from 6 different damage types before making your attack. This allows savvy players to take advantage of an opponent’s vulnerabilities or carefully avoid their resistances and/or immunities.

Finally, and most contentiously, Chromatic Orb has the second-most expensive material cost of any first-level spell — a diamond worth at least 50 gp. Some DMs wave this restriction away, but many others will require their players to buy it.

As a point of reference, 47.4% of people on Reddit agreed that a level 1 Wizard needs to buy a diamond, while only 27.5% said they’d give the player a free 50 gp for the diamond. 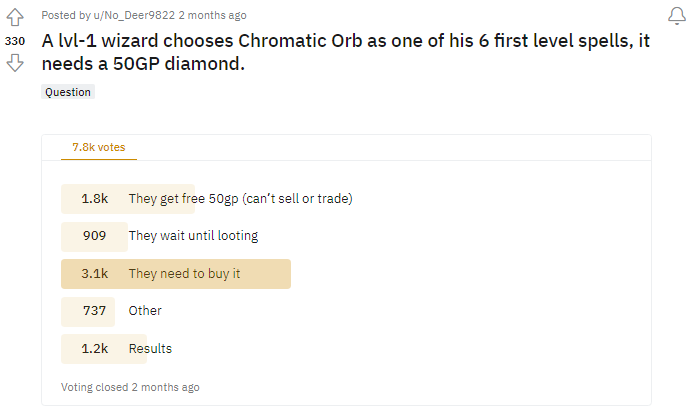 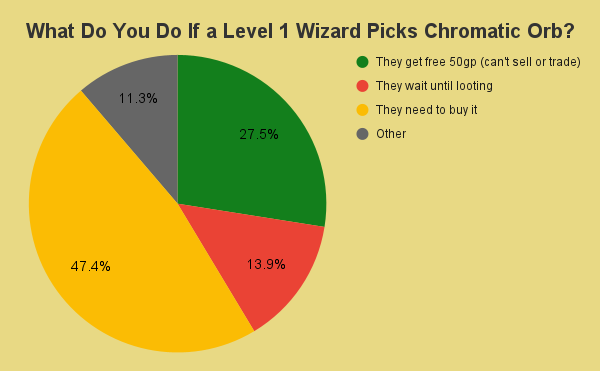 What Are the Rules for Chromatic Orb in 5e?

There are not too many rules questions for Chromatic Orb in DnD 5e, but here are a few that come things that sometimes come up: 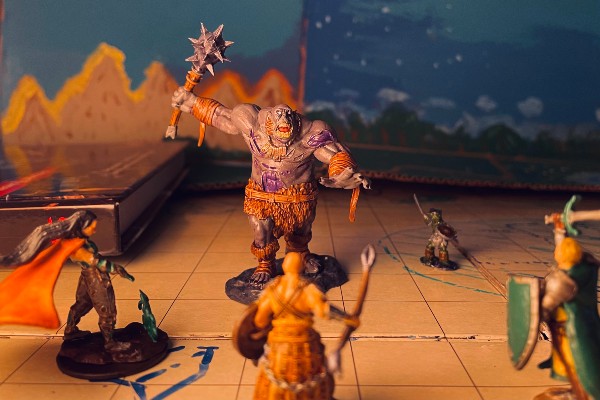 How Do I Use Chromatic Orb in 5e?

Chromatic Orb is a solid single-target damaging spell at low levels, so that’s the primary way to use it in 5e. But if you really want to make the most of this spell, here are some things to keep in mind:

Fun fact: Identify is the most expensive first-level spell, requiring a pearl worth at least 100 gp.

Yes, Chromatic Orb is a good spell at low levels, but it’s a bit expensive and many players also feel that it’s a trap. From a raw damage perspective, Chromatic Orb ties Catapult for the highest first-level, single-target option available to Wizards and Sorcerers (13.5)

But at a cost of 50 gp, some feel it’s not worth a bit of extra damage to beggar your character, especially if your DM’s world doesn’t involve a lot of fat stacks of gold pieces lying around.

Let’s take a look at Chromatic Orb’s most direct competition:

If you’re DMing a game where a player wants to pick up Chromatic Orb, you only have one thing to decide: whether you force the player to buy the diamond, find one in an adventure, or just give it to them for free.

As many point out, the typical Wizard or Sorcerer should be able to just about afford all the necessities alongside a diamond worth 50 gp, so long as the DM makes a vendor available and they don’t mind starting the game off basically broke.

That’s why I personally lean toward the “make the player buy the diamond” camp; it emphasizes the power of player choice, literally from level 1. Here’s a big damage, single-target spell that gives you the option of six damage types for one known spell — but you’ll have to shell out about half your starting wealth to have it. These types of choices are what RPGs are all about.

However, if you’re playing with new players and you’d rather let them keep their gold or let them spend it on something like a health potion instead, that’s a perfectly valid way to go about things. Especially since gold and starting wealth are usually the last things you want to worry about with brand new players.

There’s also the little-used version of making the 50 gp diamond a fun quest hook to get a player more invested in a character and provide a greater sense of reward around using Chromatic Orb. Many DMs also like to do this with Identify’s 100 gp pearl.

Go with whatever feels right to you and don’t stress too much — 50 gp diamonds won’t be a big deal to your players after a few levels anyway.