A wave of thunderous force sweeps out from you. Each creature in a 15-foot cube originating from you must make a Constitution saving throw. On a failed save, a creature takes 2d8 thunder damage and is pushed 10 feet away from you. On a successful save, the creature takes half as much damage and isn’t pushed.

In addition, unsecured objects that are completely within the area of effect are automatically pushed 10 feet away from you by the spell’s effect, and the spell emits a thunderous boom audible out to 300 feet.

At Higher Levels. When you cast this spell using a spell slot of 2nd level or higher, the damage increases by 1d8 for each slot level above 1st.

Thunderwave is a powerful evocation spell in the early levels. It offers significant area of effect damage as well as battlefield control. That being said, Thunderwave comes with some drawbacks and contentious rules once you dig deeper.

We’ll cover the basics of Thunderwave, as well as ways to optimize your use of the spell. Hopefully, we’ll also clear up some common rule misconceptions and show some of the extra utility that Thunderwave offers.

Who Can Cast Thunderwave in 5e?

The following classes have Thunderwave on their spell list:

The following subclasses get Thunderwave for free:

What Does Thunderwave Do in 5e?

Thunderwave forces each creature in a 15-foot cube emanating from you to make a Constitution saving throw. If they fail, they take 2d8 thunder damage and are pushed back 10 feet. If they pass, they take half as much damage and aren’t pushed.

Unsecured objects in the cube are automatically pushed. Finally — and this part is one you don’t want to forget on stealth missions — Thunderwave can be heard up to 300 feet away.

What Are the Rules for Thunderwave in 5e?

The rules for Thunderwave in DnD 5e are as follows:

Let’s look at how Thunderwave’s area of effect works with some visuals. In the illustrations below, “C” refers to the Caster and Xs refer to squares affected by Thunderwave. As Jeremy Crawford points out here, this is how all cube-based, self-ranged spells work:

You can place C anywhere on the perimeter or just outside of the perimeter, but not at the center. Here’s Jeremy Crawford confirming this on Sage Advice.

That’s because, for cubes (and all area of effect spell shapes), “point of origin is not included in the cube’s area of effect, unless you decide otherwise” (PHB 204). When the caster (C) is part of the 3×3 square affected by Thunderwave, his square is also affected by the spell’s effect. 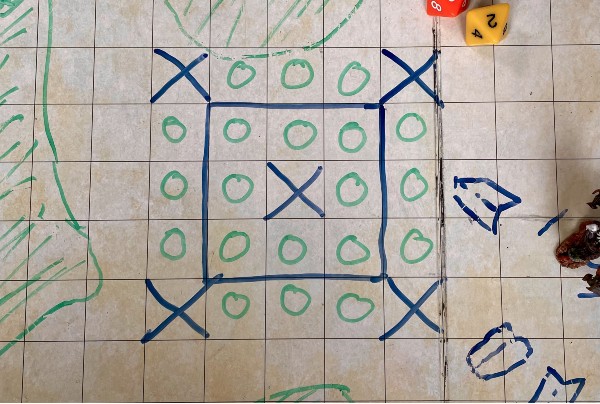 Does Thunderwave damage you if you use it like in example 3 or 4? Yes, it should damage any creature in the 15-foot cube, including allies and yourself. That still begs the question of how it would push the player, since there are an infinite number of ways to be “pushed 10 feet away” from yourself.

The most common-sense approach would be that the center of the 3×3 cube is where the force is the greatest, and so the caster is pushed away from that point.

At the end of the day, it’s up to DM discretion. There aren’t many situations where extending Thunderwave’s range out from the caster is a bad thing, so it shouldn’t be a problem. This point of contention mostly comes up when a player is trying to avoid damaging an ally by placing Thunderwave closer to themselves.

Can you lie prone and cast Thunderwave up to avoid the damage while still centering it on yourself? Many players on the internet seem to think so, and the 3d nature of a cube does seem to suggest this is possible. The opposite also seems possible (jumping and readying Thunderwave beforehand to give yourself a 10-foot jump boost).

5e’s developers have yet to weigh in on these issues explicitly, so it’s up to you and your table.

Fun fact: Thunderwave is the only spell in 5e that has a range of Self (15-foot cube), which is why it’s so misunderstood and hard to wrap your head around.

How Do I Use Thunderwave in 5e?

Thunderwave has ample uses in DnD 5e, both in and out of combat. Here are some fun ways to use Thunderwave to great effect: 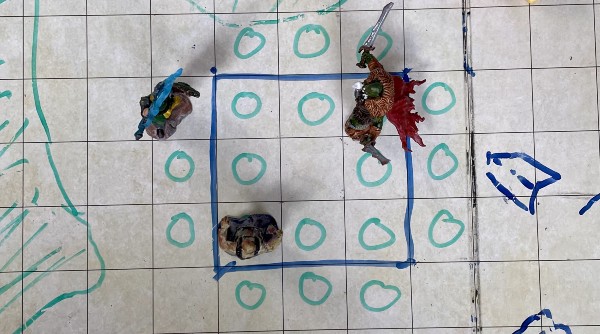 Who Can I Target With Thunderwave 5e?

Thunderwave targets a 15-foot cube emanating from the caster. On a battle map, this can be represented by 3×3 squares of 5 feet each.

As detailed above, Thunderwave is not centered on the caster, but rather emanates from them. As per the rules in the Player’s Handbook regarding area of effect spells, a caster may always choose to include the point of origin in the spell’s effect range. Since the player is the point of origin, you can include yourself in the spell’s area of effect.

Thunderwave deals damage and blasts creatures away indiscriminately; even allies must make a Constitution saving throw or take full damage and be pushed 10 feet from you.

Is Thunderwave 5e a Good Spell?

Yes, Thunderwave is inarguably a good spell. 2d8, area of effect damage affecting 15 cubic feet at first level is quite potent, even without the potential knockback effect.

The major downsides of Thunderwave are threefold:

If you’re able to work around these problems, Thunderwave is a solid spell into the midgame, as an extra 1d8 damage per upcast level keeps it competitive.

Hopefully, the rules laid out above have cleared up how Thunderwave’s cube area of effect works. That’s the biggest point of confusion around Thunderwave, especially with new players.

An intuitive reading might suggest Thunderwave is centered on the player, which actually makes the spell weaker in most scenarios. If anything, this reading of the rules should be welcome news for your players.

Other than that, be sure to have fun making players pay for failing to consider Thunderwave’s massive audible range. In some scenarios, it might make sense to rule that stone walls or rushing water muffles the sound and reduces that range. But when you want to introduce a horde of baddies to short-sighted parties, each cast of Thunderwave opens up that door.