You point at one creature you can see within range, and the sound of a dolorous bell fills the air around it for a moment. The target must succeed on a Wisdom saving throw or take 1d8 necrotic damage. If the target is missing any of its hit points, it instead takes 1d12 necrotic damage.

Xanathar’s Guide to Everything, pg. 169

Toll the Dead — one of the best cantrips to come out with DnD 5e’s first expansion, Xanathar’s Guide to Everything. It packs a wallop against already-injured baddies through some sort of sonic-necrotic waves and offers consistent damage from the early game right up until your 20th level.

We’ll cover the trickier parts of the spell, as well as its strengths, applications, and comparisons to other tempting cantrips. And some flavor stuff for dungeon masters who don’t know exactly how to describe the spell’s effects.

Who Can Cast Toll the Dead in 5e?

The following classes have Toll the Dead on their spell list:

No subclasses get Toll the Dead for free.

What Does Toll the Dead Do in 5e?

Toll the Dead forces a creature you can see within 60 feet to make a Wisdom saving throw. The spell save DC is equal to 8 + caster’s proficiency bonus + caster’s spellcasting modifier (ties go to the defender; or, more accurately, the roller).

Toll the Dead scales the way most damaging cantrips do — at 5th, 11th, and 17th level, you add one additional die (d8 or d12) to your damage roll.

As for what Toll the Dead “does,” it creates the sound of “dolorous” (sorrowful, distressing) bells that somehow mentally damage the enemy’s brain/spirit/life force (however you interpret a failed Wisdom saving throw).

The fact that it does extra damage to creatures that have already sustained damage along with the name suggests that these bells remind the creature of the grave/their mortality and/or it worsens whatever wounds they already have, speeding along the normal process of decay. More in DM tips below.

What Are the Rules for Toll the Dead in 5e?

The rules for Toll the Dead in DnD 5e are as follows: 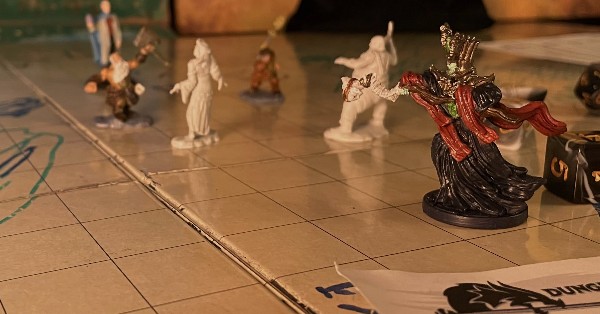 Toll the Dead is a fairly straightforward damaging cantrip that relies on a Wisdom saving throw. That said, here are some ways to optimize your use of the spell:

Who Can I Target With Toll the Dead 5e?

You can target any creature within 60 feet that you can see with Toll the Dead. However, 11 creatures in the Monster Manual are immune to necrotic damage, and another 11 are resistant to it.

Zombies and skeletons, however, are fine to target with necrotic spells like Toll the Dead. Sadly, no creatures in the Monster Manual are vulnerable to necrotic damage, so you aren’t too likely to get free bonus damage on this cantrip.

Is Toll the Dead 5e a Good Spell?

Yes, Toll the Dead is a good spell. In terms of straight-up damage, Toll the Dead beats out almost every damaging cantrip (except Poison Spray) when it hits an already-damaged creature.

Even at base damage (1d8; 4.5 average), Toll the Dead deals the same damage cantrips like Ray of Frost, Chill Touch, Shocking Grasp, and Booming Blade.

Necrotic damage isn’t all that common a resistance or immunity, so you don’t often have to worry about that. Wisdom saving throws aren’t too bad to overcome, and if you are facing high-Wisdom enemies, that’s what your ranged spell attack cantrip is for.

Toll the Dead’s 60-foot range is in line with most other damaging cantrips. Even if it does lag behind the 120-foot range of cantrips like Fire Bolt, Eldritch Blast, and Chill Touch, there aren’t many encounters where those extra 60 feet are going to matter.

Toll the Dead 5e Compared to Other Damaging Cantrips

So is it worth it to take Toll the Dead? Let’s break it down by the classes that have access to it:

For Warlocks and Wizards:

So, how exactly are you supposed to describe Toll the Dead’s damaging effect? Does it rattle the resolve of those who hear its mournful tones as they consider their own imminent demise? Does their skin slough off their body as the necrotic waves of sonic rot vibrate through their being?

It’s up to you and the player casting it. You can give your best description at the table and see how your player likes it, or let them/help them develop their own cool flavor for the spell. Some might favor the sonic element, while others are more interested in the flesh-rotting potential of these bells.

On the practical side, we did leave DMs with an unanswered question above: how far does Toll the Dead’s sound travel? It’s up to you how far the sound of a tolling bell travels and whether the acoustics of the space affect that answer.

We don’t recommend making it a huge radius like Thunderwave’s 300-foot range or so small that it’s more like a butler’s bell than a death knell. Realistically, the sound of a bell ringing is probably no louder than the sound of a swordfight or a fireball exploding.

Toll the Dead: (cantrip, 60 feet, V/S) Force a creature in range to make a Wisdom saving throw. On a failure, it takes 1d8 necrotic damage or 1d12 necrotic damage if the creature is missing any hit points. | +1 die at 5th, 11th, and 17th level