You unleash a string of insults laced with subtle enchantments at a creature you can see within range. If the target can hear you (though it need not understand you), it must succeed on a Wisdom saving throw or take 1d4 psychic damage and have disadvantage on the next attack roll it makes before the end of its next turn.

Vicious Mockery is a classic, Bard-exclusive cantrip that’s sure to create memorable moments at any Dungeons and Dragons table. A spell that attacks an enemy’s psyche by insulting them is just plain fun.

But Vicious Mockery isn’t just for flavor — it’s an impactful spell that contributes both offensively and defensively in combat situations. This article will cover how the spell works and the best ways to use it.

Who Can Cast Vicious Mockery in 5e?

The following classes have Vicious Mockery on their spell list:

No subclasses get Vicious Mockery for free.

What Does Vicious Mockery Do in 5e?

Vicious Mockery forces a target to make a Wisdom saving throw. If they fail, they take 1d4 (2.5 average) psychic damage and have disadvantage on the next attack roll they make before the end of its next turn.

The creature only needs to be able to hear the caster; they don’t need to understand them.

As with most damaging cantrips, Vicious Mockery gains an extra damage die at levels 5, 11, and 17.

What Are the Rules for Vicious Mockery in 5e?

The rules for Vicious Mockery in DnD 5e are as follows: 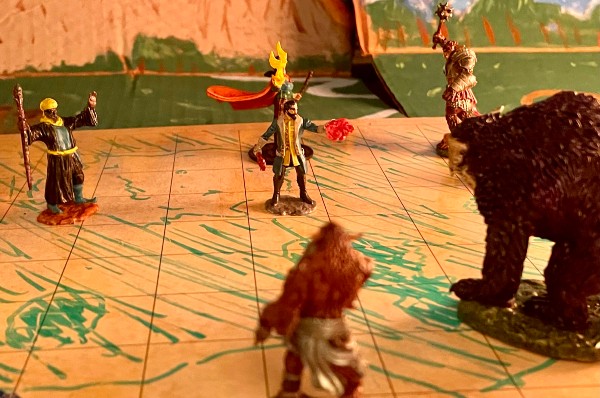 How Do I Use Vicious Mockery in 5e?

Here are a few ways to use Vicious Mockery in DnD 5e:

Who Can I Target With Vicious Mockery 5e?

You can target any creature who you can see and isn’t deafened with Vicious Mockery. The target needs to be able to hear your words, but does not need to be able to understand them.

Yes, Vicious Mockery is a good spell. Wisdom is one of the lowest average ability scores among creatures in DnD 5e, so it has a greater chance of landing against most targets than a ranged spell attack.

And while Vicious Mockery’s damage is the worst possible of any cantrip, its rider effect is quite strong. Disadvantage, even on just one attack roll, is a powerful condition to apply consistently.

I touched on the “can Vicious Mockery be cast in normal conversation” debate in the rules section. For my two cents, I think that the spell should totally be castable in this way.

It comes down to this — is it a really significant power creep to give a player a de facto Subtle Spell metamagic for a cantrip they’ll cast in combat 99% of the time anyway? My feeling is that as long as a player isn’t spamming this out-of-combat tactic to get away with murder-hoboing commoners, it’s unlikely to be annoying or overpowered.

My other DM tip for Vicious Mockery is to reward creativity. If a player comes up with a sick burn that’s original and applies to the situation or target of the spell in an incredibly apt way, give them something for it.

The two most common choices are either Inspiration (advantage on a d20 roll of their choice at a later time) or giving the creature disadvantage on their Wisdom saving throw (because the insult is so good that it’s tougher to resist than normal).

Both are great ways to reward players for thinking on their feet.

Vicious Mockery: (Enchantment cantrip, 60 feet, V) Force a Wisdom saving throw. On a failure, target takes 1d4 psychic damage and disadvantage on the next attack roll it makes before the end of its next turn. | +1d4 damage at levels 5, 11, and 17.