Grasping weeds and vines sprout from the ground in a 20-foot square starting from a point within range. For the duration, these plants turn the ground in the area into difficult terrain.

When the spell ends, the conjured plants wilt away.

A fantastic control ability that can quickly swing an encounter in your favor, Entangle is a much-loved spell in Dungeons and Dragons. And from a power perspective, I’d rank Entangle as the #1 control spell of 1st-level options in DnD 5e.

This article covers its rules and provides tips on how to maximize Entangle’s potential in-game.

Who Can Cast Entangle in 5e?

The following classes have Entangle on their spell list:

No subclasses get Entangle for free.

What Does Entangle Do in 5e?

Entangle forces all creatures in a 20-foot square to make a Strength saving throw. If a creature fails, it is retrained until the spell ends or until it succeeds on a Strength check against the caster’s spell save DC.

Additionally, the space is difficult terrain until the spell ends (each foot of movement costs one extra foot of speed).

For reference, here’s what the restrained condition does:

What Are the Rules for Entangle in 5e?

The rules for Entangle in DnD 5e are as follows: 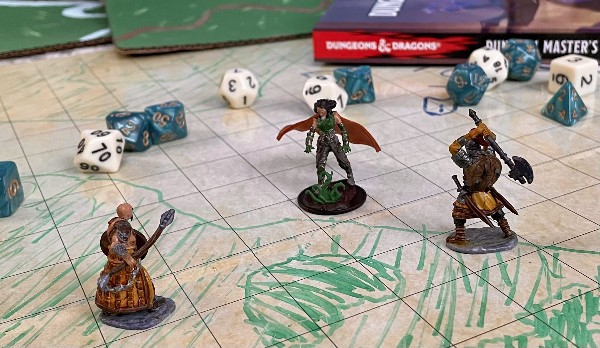 How Do I Use Entangle in 5e?

Here are a few ways to use Entangle in DnD 5e:

Who Can I Target With Entangle 5e?

You can target a 20-square-foot space of ground with Entangle. Because the spell text specific that the area starts “from a point within range” (90 feet), this means that a player can affect a space up to 110 feet away with Entangle (90 feet for the origin + 20 feet for the area of effect).

This is rare among cubic and spherical DnD spells, which mostly specify that they are centered on the point of origin.

Entangle can be cast on any surface, regardless of whether plants could actually “sprout from” it. The definition of “ground” should be read as idiomatic (common sense) according to the game’s developers. Any edge rules on what constitutes “ground” are up to your DM.

Is Entangle 5e a Good Spell?

Yes, Entangle is an incredibly good spell in 5e. In fact, I’d say it’s on the short list of best 1st-level control spells in the game. A 20-square-foot area of effect is pretty big, and the restrained condition is very powerful.

So powerful, in fact, that the only other 1st-level spells that restrained (Ensnaring Strike and Snare) are both single-target spells. The potential to affect 16 total creatures (unlikely, but technically possible) with Entangle is just bonkers. Even if you just hit three enemies, you’re getting huge utility for a single spell cast.

That’s at least three enemy turns wasted and likely a few turns of attack advantage against those targets/disadvantaged attacks coming from those targets.

Many spells allow for automatic saving throws to be made at the start or end of an affected creature’s turn, without using an action. The fact that an enemy has to choose to blow their action breaking free or make a weaker attack is exactly the type of “rock and a hard place” situation you want to put enemies in.

Finally, Entangle scales incredibly well as you progress through a campaign. Your spell save DC will naturally rise, and the restrained condition remains powerful against creatures of any level. And the fact that you never have to upcast Entangle means that you’re getting an equally good effect for a spell slot that becomes cheaper and cheaper to expend as you level up.

Ensnaring Strike is a 1st-level Ranger-exclusive spell. It’s a bonus action, lasts for up to 1 minute (concentrion permitting), and causes the next weapon attack that lands to alows for a Strength save or restrain the target.

The target also takes 1d6 piercing damage (scalable with upcasting) at the start of its turns while it remains restrained. The creature or another creature can use an action to make a Strength save to break free of the restraints.

In almost all scenarios, Entangle is superior to Ensnaring Strike. 3.5 average piercing damage per round is unimpressive, and the fact that another creature can free the restrained creature makes it less effective at shutting down the specific enemies you want to shut down.

And, of course, it only affects a maximum of one creature. To me, this makes it several magnitudes of utility worse than Entangle. And since Tasha’s added Entangle to Rangers spell lists, there’s really no reason for anyone to take Ensnaring Strike anymore.

I left DMs with a somewhat open rules question — what is “ground”? For my two cents, any surface that land-bound creatures can walk on without Spider Climb counts as ground. Don’t worry too much about the logistics of this.

For example, plants bursting from the ground of a boat would likely cause the boat to capsize. But that’s not what Entangle does, nor should you complicate matters by considering it.

Basically, just look at the mechanics of what the spell actually does and forget about the flavor text — when it becomes inconvenient.

Entangle: (1st-level Conjuration, 90 feet, Concentration, up to 1 minute, V/S) Force creatures in a 20-foot square to make a Strength saving throw. If a creature fails, it is restrained until the spell ends. A creature can use its action to make a Strength check against your spell save DC. On a success, it frees itself. For the spell’s duration, the area is difficult terrain.