You speak a one-word command to a creature you can see within range. The target must succeed on a Wisdom saving throw or follow the command on its next turn. The spell has no effect if the target is undead, if it doesn’t understand your language, or if your command is directly harmful to it.

Some typical commands and their effects follow. You might issue a command other than one described here. If you do so, the GM determines how the target behaves. If the target can’t follow your command, the spell ends.

Approach. The target moves toward you by the shortest and most direct route, ending its turn if it moves within 5 feet of you.

Drop. The target drops whatever it is holding and then ends its turn.

Flee. The target spends its turn moving away from you by the fastest available means.

Grovel. The target falls prone and then ends its turn.

Halt. The target doesn’t move and takes no actions. A flying creature stays aloft, provided that it is able to do so. If it must move to stay aloft, it flies the minimum distance needed to remain in the air.

At Higher Levels. When you cast this spell using a spell slot of 2nd level or higher, you can affect one additional creature for each slot level above 1st. The creatures must be within 30 feet of each other when you target them.

Command is a satisfying spell that has enemies scrambling to obey your one-word demand. Creative players skilled in brevity and the imperative mood can come up with some clever uses outside of the spell’s listed examples.

Who Can Cast Command in 5e?

The following classes have Command on their spell list:

The following subclasses get Command for free:

What Does Command Do in 5e?

Command causes the targeted creature to perform any action you command it to, so long as your command is limited to one word and won’t cause the target self-harm. The creature must also not be undead and must understand the language you speak your command in.

Command only works if the target fails a Wisdom saving throw; otherwise, nothing happens. If Command works, the creature will follow the command on their next turn.

While the spell text suggests possible commands, there are plenty of other uses for Command, discussed below. 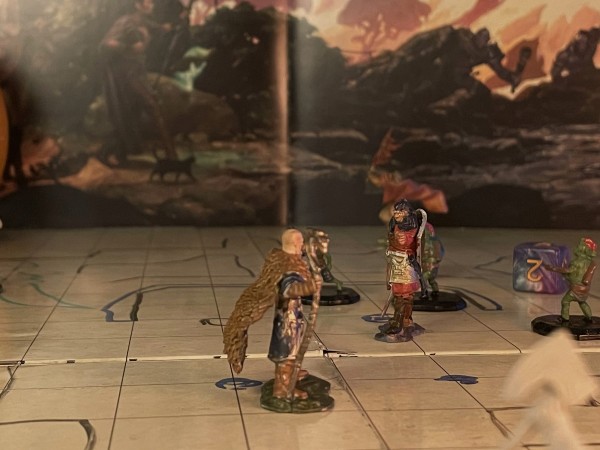 What Are the Rules for Command in 5e?

The rules for Command in DnD 5e are as follows:

How Do I Use Command in 5e?

Command has too many possible uses to collect here, but a few more examples of great one-word commands include:

Some players might also try to use Command as a way of ending an enemy spell caster’s concentration — it’s up to a GM to rule on this, as it does make Command quite powerful as a first-level spell.

Who Can I Target With Command 5e?

You can target most intelligent creatures with Command, although undead creatures are immune to the spell’s effects. Command is not a Charm, so creatures that are immune to Charm effects are not immune to Command (this cuts both ways, for players with feats like Fey Ancestry).

The creature must be able to understand your language, so Command won’t work on animals or other creatures that don’t speak. You’ll also need to know how to say the word you want to Command in a language they know, so having more language proficiencies opens up more potential targets for Command.

Or you could make it a mission to check out a library and learn a few choice words prepared in another language. For instance, if you’re going to deal with Fire Giants, you might try to find a way to learn a handful of words in Giant.

For every level above the first, you can also target one additional creature in range with Command. However, the second creature must also be within 30 feet of the initial Command target. This means if you want to Command 3 creatures, you should aim for the middle one to maximize the spell’s spread.

Is Command 5e a Good Spell?

Yes, Command is a good utility spell with great combat and role-playing potential. It does require a Wisdom spell save to land and it has no effect on a successful save, so Command can be a risky spell to cast in combat.

While Command doesn’t have the raw power of an attack like Guiding Bolt or the straightforward support of spells like Healing Word, it can be a very memorable and rewarding spell to use.

Suggestion is much more powerful than Command because it allows you to suggest a full sentence rather than just one word. Additionally, Suggestion lasts for up to 8 hours as long as the caster can maintain concentration.

You can also set a trigger for Suggestion, opening up even more role-playing potential.

Suggestion has similar limitations and upcast potential as Command, also requires a Wisdom saving throw to land, and is also a save-or-suck spell.

Command does have three small advantages over Suggestion: twice the range, no material component requirement, and the ability to cast it on enemies that are immune to Charm (which you cannot do with Suggestion).

Command is a spell that begs for rules-lawyering as creative players try to get their money’s worth out of one word. They’ll try to gesture simultaneously, make compound words that don’t exist, and all other sorts of shenanigans.

Fun is king, and if players aren’t suggesting any game-breaking commands, it’s usually best to let them on. Just be sure it makes sense that the creature would understand what’s being commanded in that one word. Something like “confess” is a weak command unless the creature knows what you’re expecting of it and can sum up their confession in six seconds.

“Betray” can also be a tricky one, but you can have fun twisting the player’s intent and causing the creature to betray their allies in a less violent way. Or you can let it work and cause an infighting scene à la The Lord of the Rings. Whatever seems suitable for the occasion.

There’s also the case when a player will try to command a creature to do something that they don’t know is harmful in the time. If a creature doesn’t know that the action is harmful at the moment, then the Command should work.

For example, if players set a deadfall and the Paladin commands the enemy to “Approach,” it’s reasonable that the creature would follow the command, not knowing that a trap awaits.

Command: (1st-level, 60 feet, V) Force a Wisdom saving throw. On a failure, the target follows a one-word Command you speak on their next turn. Does not work on undead or those who don’t understand your language. Cannot command a creature to take a directly harmful action. | +1 creature per slot level above second; creatures must be within 30 feet of each other.