You create a sound or an image of an object within range that lasts for the duration. The illusion also ends if you dismiss it as an action or cast this spell again.

If you create a sound, its volume can range from a whisper to a scream. It can be your voice, someone else’s voice, a lion’s roar, a beating of drums, or any other sound you choose. The sound continues unabated throughout the duration, or you can make discrete sounds at different times before the spell ends.

If you create an image of an object–such as a chair, muddy footprints, or a small chest–it must be no larger than a 5-foot cube. The image can’t create sound, light, smell, or any other sensory effect. Physical interaction with the image reveals it to be an illusion, because things can pass through it.

For spellcasters who like to fleece their foes, the Minor Illusion cantrip is a tempting offer. While not as powerful or dynamic as later Illusion spells like Silent Image and Major Image, Minor Illusion has more uses and applications than you might think. Let’s go over the basics, as well as the best ways to pull the wool over people’s eyes with Minor Illusion.

Who Can Cast Minor Illusion in 5e?

The following classes have Minor Illusion on their spell list:

The following subclasses get Minor Illusion for free:

What Does Minor Illusion Do in 5e?

Minor Illusion creates a three-dimensional object no larger than a 5-foot cube or a sound, either of which lasts for up to one minute. You can recast Minor Illusion or dismiss the illusion as an action, and it does not require a verbal component to cast or concentration to maintain.

A creature can use its action to investigate the illusion by making an Investigation check against your spell save DC (8 + proficiency bonus + spellcasting modifier). If a creature discerns the illusion, it becomes faint.

Wizards of the School of Illusion have an improved Minor Illusion that can create both a sound and image simultaneously (PHB 118).

Now let’s get into the nitty-gritty of how Minor Illusion works.

What Are the Rules for Minor Illusion in 5e?

The rules for Minor Illusion in DnD 5e are as follows:

Fun fact: Minor Illusion has the longest spell description (194 words) of any cantrip in DnD 5e. 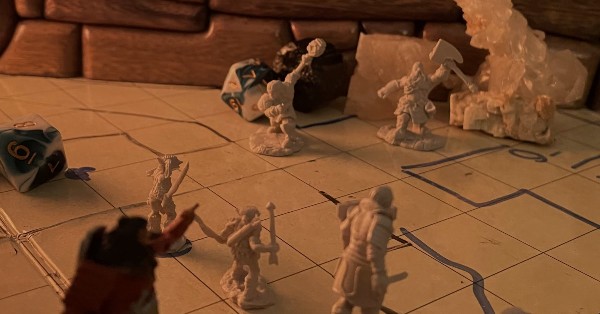 How Do I Use Minor Illusion in 5e?

While Minor Illusion is the most limited of Illusion spells, it still has plenty of fun and practical applications:

Yes, Minor Illusion is a good spell that creative players can have loads of fun with. While limited in its combat capabilities, Minor Illusion has plenty of out-of-combat applications that you can’t get out of most cantrips.

There’s also the stipulation that comes with every illusion spell: Minor Illusion is as good as your DM allows it to be. Work with your DM to understand what is and isn’t allowed with the spell, and you’ll have a much better and more consistent time with it.

Prestidigitation has many similar applications as Minor Illusion, and it has additional ones as well. Prestidigitation can produce sensory effects like smells, light, and heat, clean or dirty a small area, leave long-lasting marks, and create very short-term illusory objects of hand-held size — and you can maintain up to 3 of these effects at a time.

Minor Illusion benefits from having no verbal component (adding to its stealthiness), its superior range, and larger maximum size. Minor Illusion also has more potential limited uses, because imagination (and the spell description) are its only limitations, whereas Prestidigitation’s uses are clearly spelled out.

All in all, they’re both fine spells that achieve similar effects — talk to your DM about how you plan on using one or the other to learn which one can give you more of what you want. Definitely don’t take both if each is on your class list; it would be pretty useless and redundant.

Minor Illusion can be a tricky spell for dungeon masters — allow too much, and players get an overpowered cantrip; allow too little, and players won’t have fun with the Illusion school or see any reason to pursue it. When players get frustrated by its capabilities, remind them that Minor Illusion is a cantrip and the school of Illusion has more impressive things in store for them later.

One fun way to lean into the gray area of Minor Illusion’s creature-making capabilities is to make players get better with illusion magic if they want to make more lifelike faux-creatures. For example, a first-level Wizard might make a childish deformity that fools exactly no one when trying to create an illusory Goblin, but at level 20, it may be a genuine work of art.

In short, be communicative, be consistent, and reward creativity from your players. Illusion spells feel really satisfying when they work, but they’re only attractive enough to pick up when players understand the spells’ full rules and applications.

Physical interaction with the image reveals it to be an illusion. A creature can examine the illusion with an Investigation check against your spell save DC. If it discerns the illusion, the illusion becomes faint.